A true story about gullibility and superstition still reigning at the beginning of the 19th century helped people in Spiesheim to their nickname. In July 1804, Peter Fuchs married a young woman from Spiesheim and lived in this house from that day on. 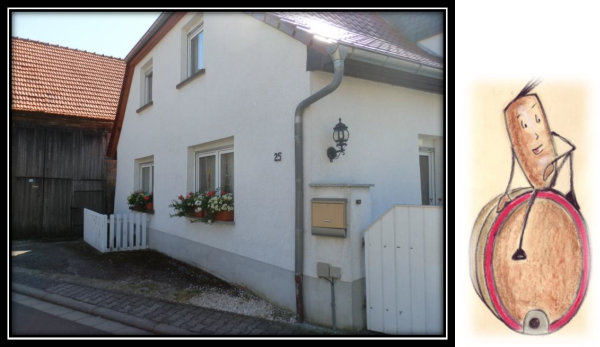 In 1769, Fuchs was born in Offenbach/Main as son of a knacker (responsible for the carcass disposal in a certain district). He posed as graduated veterinary, or maybe he just had a good knowledge of veterinary medicine. No records of that time could clarify this. However, there was a "Doctor" in the village now who took care of the farmers' ill cattle. People thought highly of him and even attributed supernatural power to him. When a head of livestock was ill, "Doctor" Fuchs was called. He knew a good many remedies to help the ill creature; he talked to it, rubbed its belly, and he often was successful with his "cure". Whether the consistently meagre reward made him help to accelerate success a bit or if other circumstances were the reason will never be clarified.

As it turned out much later, Mr. Fuchs began to cheat his innocent fellow citizens.

While the farmers were working on the fields, he sneaked into yards and cowsheds and milked some cows at unusual times. In the evening, the farmers were horrified to see that their cows gave little or no milk and, assuming their cows were ill, called for "Doctor" Fuchs. The latter clearly diagnosed the curse of a witch and offered to lift it, against being rewarded with money or in kind, of course. As the farmers wanted their cows to be freed from the witch's curse they accepted. Fuchs got down to work, stroked the "bewitched" cows, murmured some magic spells and, last but not least, hit a wooden spigot ("Zappe") into the wall of the cowshed. Additionally, he promised that the cow would be freed from the curse the next morning and give milk as usual. Of course, that happened, and so he received the promised reward of the farmers who believed in the effect of the magic spells. In the course of time, he acquired a good reputation. He was up to mischief in nearly every cowshed in Spiesheim.

As so often, "the pitcher goes often to the well and gets broken at last". Having become suspicious through so many successfully banished witches, some younger farmers watched their cowsheds and caught the "doctor" when he secretly milked the cows again. He got a sound thrashing and, additionally, the then mayor Wagner reported Mr. Fuchs to the police in Wörrstadt. Fuchs had to serve a prison sentence and was never seen again in Spiesheim.

As this story quickly spread more and more around in neighbouring villages, ever since then, people living in Spiesheim have been nicknamed:
"Die Zappe - The Spigots".

The "Song of Spiesheim" summarises this story with the following verse:

This is to say in English:

Mr. Fuchs cheated the whole village:
With a spigot in the wall
he said he'd banished the witch.

This is a modern illustration of the "Spigot" displayed on all signs of the "Tour of Spiesheim's History". 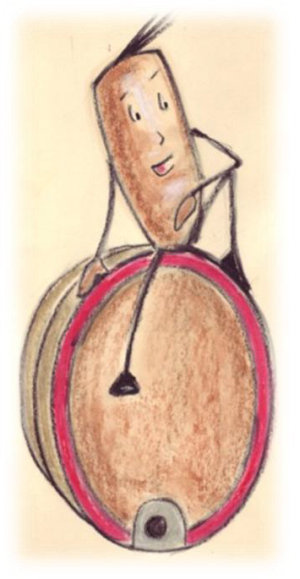